After a frustrating experience with an online game recently I thought it would provide a great example of how ISO 9001 can relate to a service industry mostly outside of certification – online gaming.

I’ve been playing Sniper Fury by Gameloft for some time now and enjoyed the online gaming experience, but this morning I uninstalled the game and it got me thinking about quality management and how it applies to all industries.

So the whole premise of the game is about progressing through a range of levels, obtaining gear as you go through ‘purchases’ with rubies which you earn through game play or you can buy them with your hard earned cash.

So a couple of weeks ago I noticed my rubies total drop twice without making any purchases. This was annoying, but as I hadn’t actually parted with any cash, I persisted and a week or so later I was rewarded with a gift of 200 rubies from Gameloft as an apology for ‘technical issues’. On balance I think I probably broke even or maybe gained a couple of rubies as a result of that glitch.

This weekend I entered a small competition to win gear. I was placed in the top ten so I was expecting to receive the top prize, but had to wait until the competition had concluded to be sure. This morning I logged in and no mention of the competition, the prize or how I had done. That was annoying – I’d invested significant time to get into the top 10.

Then I attempted to use an item of gear during game play. It got used, but I never received the boost that the gear was supposed to provide. I tried 5 or six times to use gear and saw my gear totals dropping away, but no boosts.

The upshot of all of this was that I decided I’d wasted enough time on the game and uninstalled it ……..and then I started thinking about what made me uninstall it and software company’s quality management.

So how do ISO 9001 principles apply here? Well the following should all be in place for it to meet ISO 9001 (or to achieve top customer satisfaction):

This is just a quick look at the obvious quality requirements which relate to the online gaming software service I encountered. ISO 9001 aims to help companies deliver products and services meeting customer expectations. The standard may not have originally been written for the service industry, but there’s much within it that is of value to that sector.

Processes and their place in Management Systems

The management system standards currently makes more reference to processes than they do procedures. This is because with modern software which utilises workflows and automated machines often a process can be controlled automatically without relying on people and procedures, but what if you don't have fancy software controlling your processes. Do you still need procedures or can you use processes? 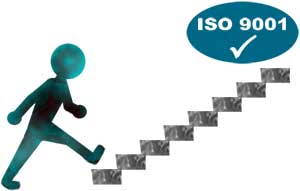 There’s quite a bit of sorcery surrounding ISO 9001 and it’s often consultants who proliferate that view, but we're going to provide the simplest explanation of what you have to do to comply with ISO 9001 in as few words as possible.